As a programmer, you get to operate in your own secret universe every single day, because you speak a special programming language or two that only fellow coders will recognise.

So, you’ll probably come to appreciate these 10 jokes only programmers will find funny. Enjoy...

For more articles on tech, coding and developing, check out our Codeslaw Insights section. 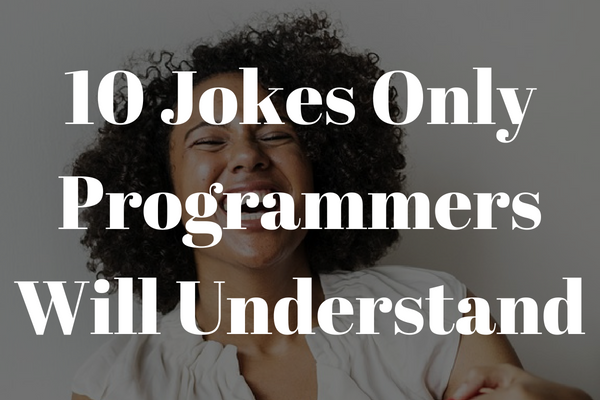 Read on for a laugh:

A manager, a mechanical engineer, and software analyst are driving back from convention through the mountains. Suddenly, as they crest a hill, the brakes on the car go out and they fly careening down the mountain. After scraping against numerous guardrails, they come to a stop in the ditch. Everyone gets out of the car to assess the damage.

The manager says, "Let's form a group to collaborate ideas on how we can solve this issue."

The mechanical engineer suggests, "We should disassemble the car and analyze each part for failure."

The software analyst says, "Let's push it back up the hill and see if it does it again."

Q: How many programmers does it take to screw in a light bulb?

A: None. It's a hardware problem.

The state of development in 2017: “Please don’t apply if you don’t have the core concepts of programming, and you depend upon copying and pasting the code from StackOverflow/saved file.”

Definition, Programmer: An organism that turns caffeine and pizza into software.

Software developers like to solve problems. If there are no problems available, they will create their own problems. It’s an addiction Hongkiat

Definition, Algorithm: Word used by programmers when they do not want to explain what they did.

An optimist says: “the glass is half full.”

A pessimist says: “the glass is half empty.”

A programmer says: “the glass is twice as large as necessary.”

I'd like to make the world a better place, but they won't give me the source code...

Java and C were telling jokes. It was C's turn, so he writes something on the wall, points to it and says "Do you get the reference?" But Java didn't.

Next time you attend a tech conference or even a blockchain conference you’ll be equipped with some jokes to (hopefully) break the ice with.

The 5 Best Tips for Attending a Tech Conference

The 5 Best Games for Developers

How to Build Winning APIs

5 Things Developers Need to Know About The Global Cryptocurrency Market

The 5 Principles of User-Centered Mobile Design