Should We Be Afraid of Artificial Intelligence?

Artificial Intelligence is here, though it doesn't yet look the way we expected. Humanoid robots aren't walking around as our peers, demanding rights or fighting wars. But we do see signs of change. Smart speakers let us boss our homes around and engage in some degree of rudimentary conversation. Drones can follow coordinates, and increasingly cars can do the same.

In the future, AI will continue to replace us in some areas and augment us in others. Here's how it's playing out in three aspects of our society.

If you're a coder, software developer, computer scientist or programmer looking for a job, check out our jobs section to browse open positions and other opportunities. 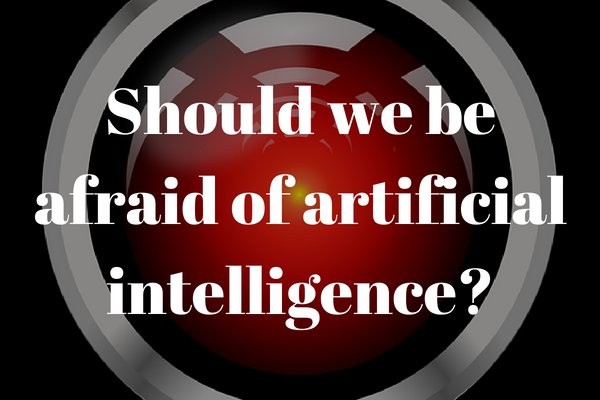 Read on to learn more about:

First, What Is Artificial Intelligence?

Artificial Intelligence, or AI, is an umbrella term. It refers to a man-made creation's ability to "think." We've seen rudimentary AI for years, with robotic arms or computer programs able to function on their own based on simple rules (such as If This, Do That). Now AI is getting smarter.

Phrases such as Machine Learning and Deep Learning refer to a program's ability to learn and think on its own. A person provides the original programming, but the computer can then analyze data and come to conclusions. In some instances, it may adopt new, unexpected behavior. We've seen this happen with Facebook chatbots.

AI refers to the use of such software in everything from desktop applications to remote servers, mechanical limbs, drones, and autonomous vehicles.

The Impact Artificial Intelligence Will Have On Jobs

As we develop new ways of doing things, old methods go away. When this happens, someone's expertise with the traditional approach gradually (sometimes rapidly) becomes less important. If your job involves doing something the old way, you're now out of a job.

Many of us grew up never knowing that computers used to be people who solved math equations. Some of our jobs will seem just as foreign in a matter of decades.

Automation and mechanization have already eroded millions of jobs, reducing the number of people needed to work a factory or farm a field. In rural corners of the US, for instance, one may never see people tending the fields; solitary tractors roamed the land instead. Today those tractors are only getting smarter.

AI may threaten jobs as diverse as loan officers, truck drivers, and dental hygienists. You're probably reading this as a computer programmer. In this equation, you're presumably the person we all need to create the AI and teach it what to do. But that is only if artificial intelligence is your chosen field. As we know, this industry is multifaceted. AI likely won't replace the creative work of video game developers, but it could reduce the number of sysadmins companies hire to maintain their networks.

Job loss will happen, but it won't happen evenly around the world. Companies in cities with high costs of living may find it cheaper to invest in AI than to hire additional workers. Others in areas with affordable housing or slower internet connections may find it cheaper and more effective to continue putting bodies in chairs. Those who do have jobs will increasingly find themselves working with or alongside AI to get more done.

AI is already helping to shape the future by playing a role in how voters choose between politicians. These leaders put in place policy that will have ramifications for generations to come. AI then plays a role in the degree to which people support or resist these policies.

Consider social media. Social networks have become a place where many people consume news and debate with others. What people see when they log in depends on what algorithms think will best match their interests. People with progressive leanings see more items that reaffirm their views. People with a more conservative worldview see more people who are like them. People immersed in conspiracy theories fall deeper and deeper down the rabbit hole. People are free to vote however they want, but a form of artificial intelligence is already shaping the information that informs their views.

Political organizations are using machine learning to connect them with the voters most likely to be receptive to their messages. This can have positive effects such as increasing turnout, but such tactics can also discourage certain people from voting. AI also gives groups the ability to deliver hyper-targeted ads, compounding the issue of voters being exposed to limited types of information.

AI's influence goes beyond elections. Public servants are experimenting with ways to use AI to better administer services. Child Protective Services, an agency in many US states that looks after the safety of children, in some instances relies on algorithms to determine which areas and which families are most in need of attention. This can have the positive impact of better utilizing limited resources, but it can also lead to certain communities facing increased profiling and the unnecessary disruption of families.

Governments are wrestling with how to respond to these new forms of technology. Heightened political polarization reduces the likelihood of creating a plan or effectively implementing one. Meanwhile, the impact AI will have on elections and policy implementation is only set to grow.

The Use of Artificial Intelligence in War

The United States military is considering using AI in drones to automatically jam incoming missiles, fire on threatening vehicles, and gather data. Other robots could act as companions to humans on the ground, providing them with more tools to stay out of harm's way.

The military has tried to work with companies like Google to utilize AI to improve the accuracy of missile strikes and other satellite or drone-based forms of tracking. This has brought conflicted feelings from private sector employees who are uneasy with using machine learning in this way.

The US is hardly alone in adopting AI for military use. China is developing unmanned submarines that can navigate on their own. These subs may be used to patrol areas, plant mines, and launch suicide attacks against enemy ships. China sees this as a way to counter the naval dominance the United States has enjoyed since the end of the second World War.

As is the case in the private and public sectors, AI will both replace people in some tasks and aid them in others. But with issues of life and death so explicitly on the line, the role AI will play in war is far from certain.

Should We Be Afraid?

Tesla and SpaceX founder Elon Musk considers AI to be potentially the biggest existential threat facing humankind. Such conversations are often abstract and theoretical. Mankind gained the technical ability to eradicate itself in the early 20th century with the exploration of atomic energy. Back then, military leaders expected to actively use atomic bombs in the battlefield. The Nuclear Age went on to see investment in nuclear technology as an integral component in civil and military life.

Since then, we've changed our thinking. Major nuclear powers have signed treaties, and countries are building fewer nuclear power plants. While nukes haven't gone away, our shift in thinking has gradually made the world safer.

The same could be true for AI. Musk himself co-founded OpenAI, a nonprofit devoted to creating safe AI. He's also in the minority of tech billionaires in that he believes governments should pass regulations on the development and use of AI. As the impact AI has on all of our lives continues to grow, we can only imagine how people will respond.

Ultimately, it will take the participation of the whole of society to shape what form AI takes. It's not just about tech giants and politicians: regular citizens should have a say in when AI replaces human involvement, when it works alongside us, and when it shouldn't have a role at all. Only in this way will we be able to make artificial intelligence work for and with us, rather than be a burden on our lives.